You may notice there are lots of options and drop downs on my site. Each one is a customization option you can choose to make your perfect holster. In this post, I’ll discuss each option I offer and what each one does; some are cosmetic, most are functional, some cost additional due to increased work involved or the added part costs extra on my end.

Right or Left handed: This should be obvious, it’s the hand you use to shoot. It’s the side on which you’ll carry your gun. Please don’t forget this one.

Handgun: The model gun you are getting the holster. I have molds for 50-60 guns, if it’s not listed, I don’t have it. Most guns that have multiple caliber options are the same for 9mm, .40, and .357 Sig. .45ACP versions of those guns are usually always slightly wider and will not fit. Exceptions to this are Ruger SR series, each caliber is slightly different, and the Springfield XDS, all calibers are the same! Many guns have different lengths for the slide / barrel, make sure you select the correct one. Kydex holsters are form fit to your exact gun, don’t order one thinking it *might* fit. 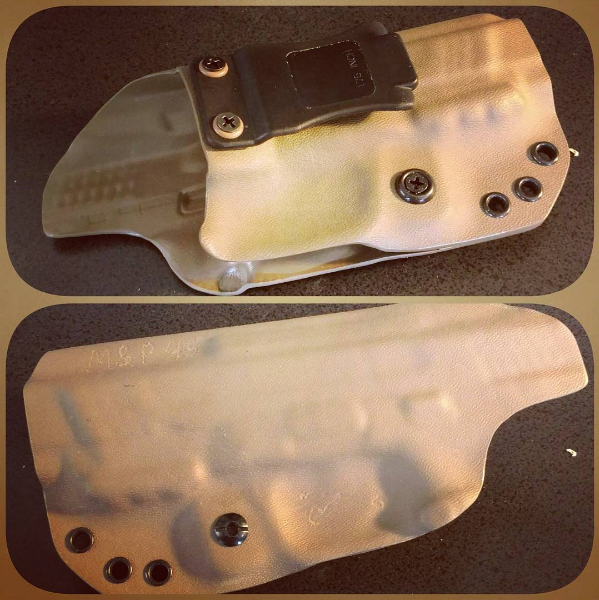 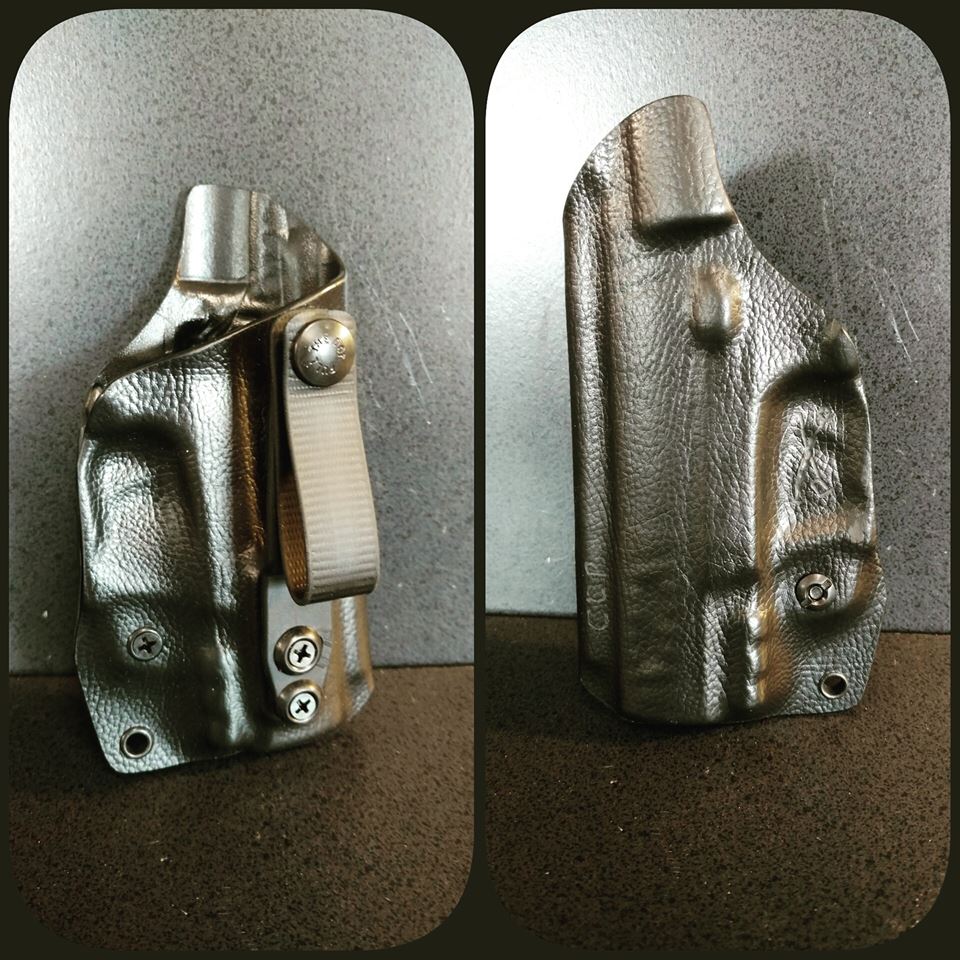 Colors: Obviously the color of the holster. Two piece OWBs have an outside and body side color. I usually keep most solids in stock, some patterns. Most patterns are special order and take time to be delivered. IWBs and OWBSlims are a one piece “taco” style, only one color option is selectable.

Bottom Opening: Semi closed slightly wraps around the muzzle and protects it from being bumped or scratched. The partial opening allows brass, gravel, or other debris to escape instead of being trapped and not allowing the gun to be properly holstered. Open bottom is totally open, allowing similar framed, different length guns to use the same holster. A Glock 19 open bottom would allow a 17 to holster, but protrude ½” (shown), and a 26 would fit but be recessed by ½” inside. 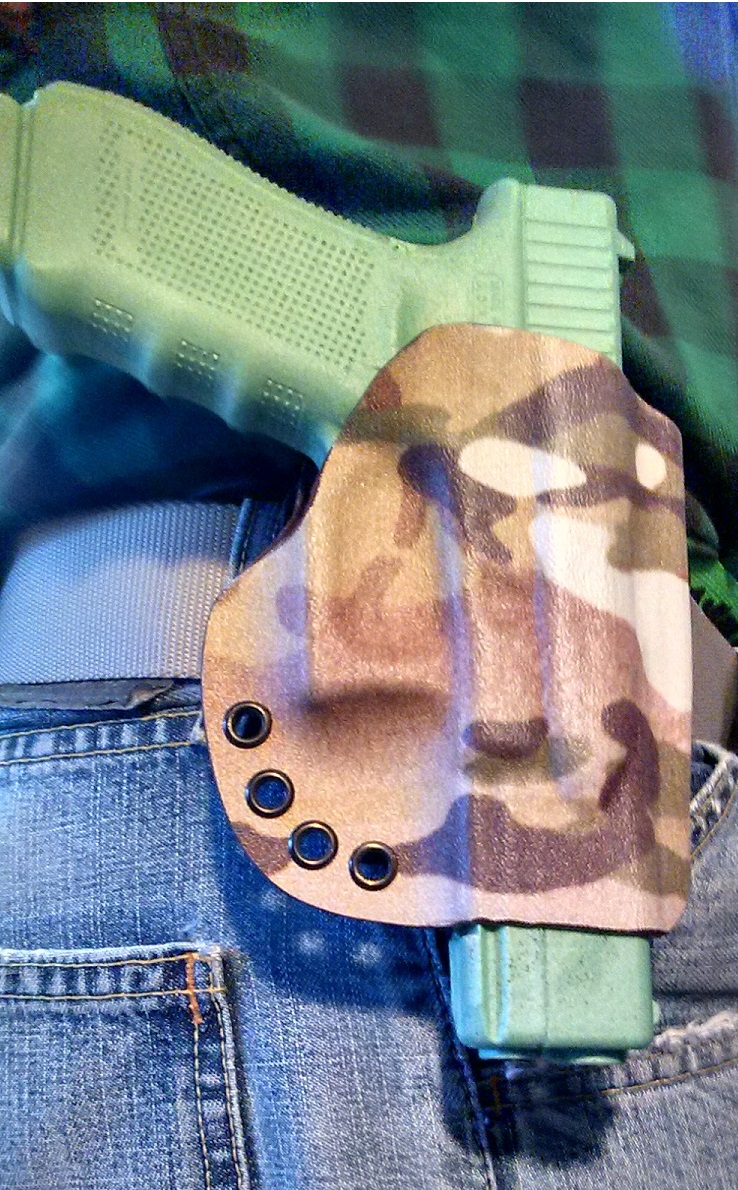 Forward Cant: Straight up is zero cant, 10 and 15 degrees forward is the gun being molded in the holster to those degrees. When trying to conceal an OWB worn gun, you are trying to hide the grip, as the slide is pressed against the body. A forward cant moves the grip more in line with the body instead of protruding directly to your rear.

Sweat Guard: This is the portion against your body, between you and the gun. It protects your gun from rust from the oils in your skin or sweat. It also prevents your skin from being pinched when re-holstering. A full sweat guard goes all the way to the rear of the pistol, low is about even with the front portion (just above the mag release), and mid is between the two (usually middle of the slide serrations).

Threaded Barrel: If you shoot with a silencer, you know what a threaded barrel is! If not, your barrel is likely flush with the end of the slide.

Tall Suppressor Sights: Tall sights allow a shooter to see over a silencer when attached to the pistol. Most of my holsters will clear tall sights, however, I want to make double sure they do, hence the option.

Weapon Mounted Light: If your gun has a light on it, you need a special holster for that setup. It does require some extra work on my part with blocking and fitting. The end result is worth it though! I have many lights on hand, I only use high quality lights (NO NC STAR or other gun show crap!). When the light is mounted, the retention comes from the light itself, as opposed to the trigger guard without the light. Due to the blocking needed for the light, the gun will not work in the holster without the light attached.

Level II Spring Retention Hood: This option adds a spring loaded hood that adds a physical barrier from the gun being drawn unless the hood is released. To release, the thumb pad is pressed against the body. 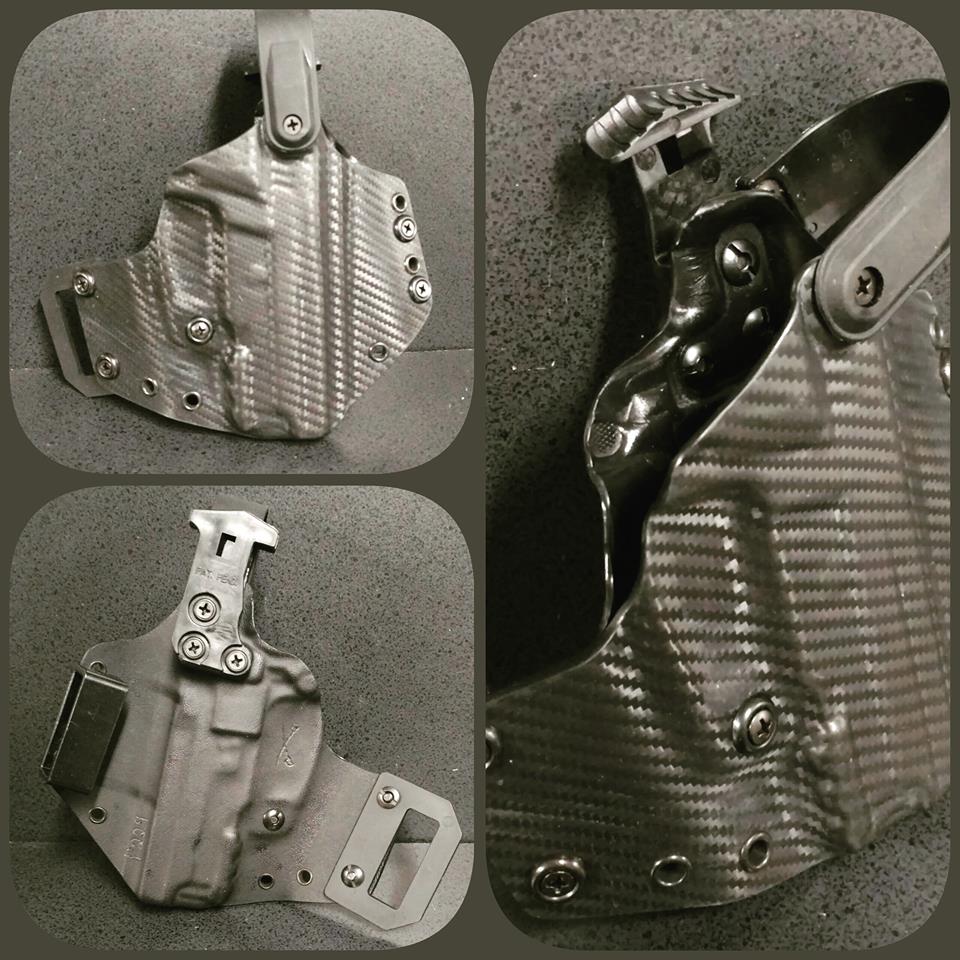 Level II Thumb Break: Similar to the spring hood, this is simply a soft strap with button that is broken by the thumb and allows the gun to be drawn. (It's backwards in this picture, the button goes toward the body, I fixed it after pic was taken). 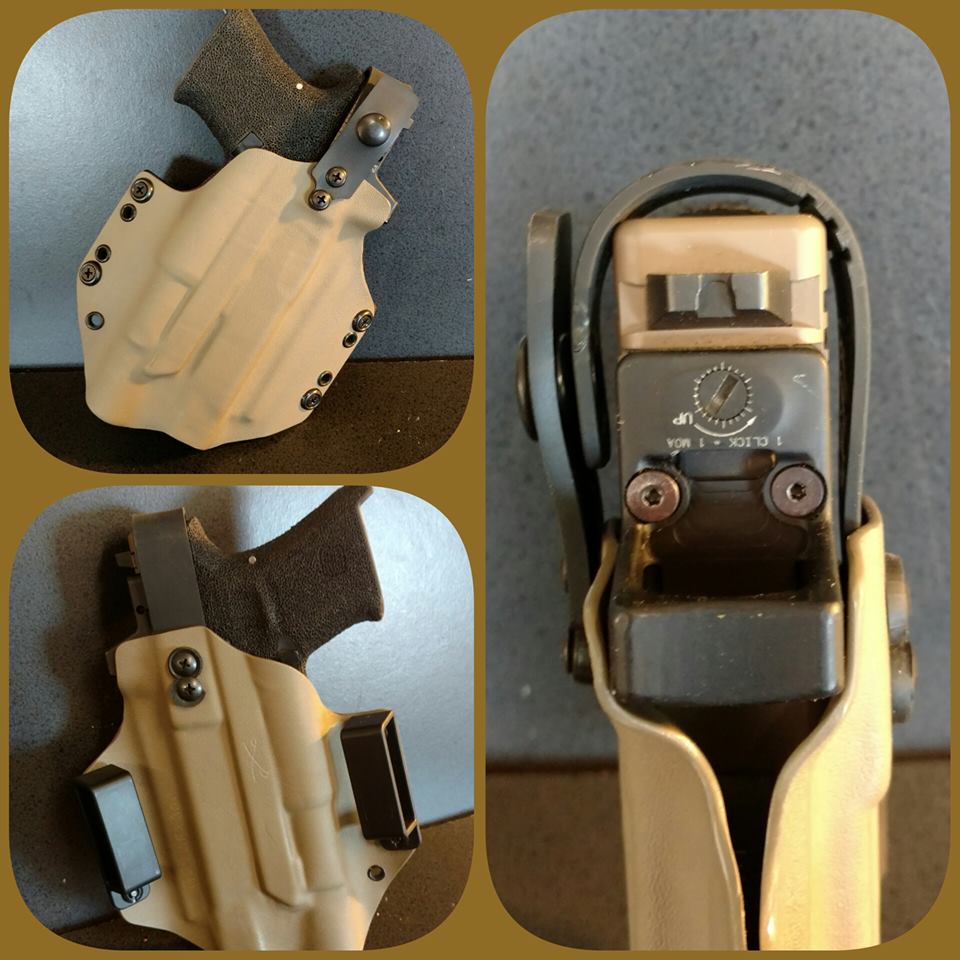 Hopefully, this clears up any questions you may have!

All prices are in USD.